Be real. Be honest. Be there for each other. 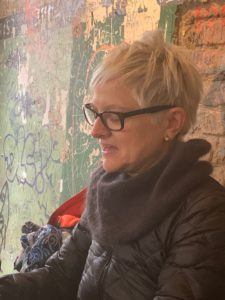 Rita Bozi is a multi-disciplinary Somatic Relational Trauma and Psychedelic-informed Therapist. She is a Consultant Facilitator of the One Brain System, a Certified BodyTalk Practitioner, has a Diploma in Shiatsu Therapy and is a former instructor at Mount Royal College in Calgary and Langara College in Vancouver.

Forty years of personal seeking, and twenty-five years of professional private practice have taken her on many detours and excursions. Through this depth of experience, Rita has developed a body and client-centred, relational right-brained approach that is unique, expansive and intelligent. She has a passion for Attachment Theory, Indigenous plant medicines, Authentic Movement, Feldenkrais, Craniosacral Therapy, and Self-responsible communication.

She is the director of Brilliant Healing Systems working with individuals one on one, with couples, and with groups leading unique, experiential and creative workshops. She is a colleague of Dr Gabor Maté and has been mentored by the late genius and visionary Carol-Anne Bickerstaff, Sharon Stanley, Bessel Van Der Kolk and follows and incorporates the work of Alan Schore, Pat Ogden, Stephen Porges, Stephen Levine and The Haven. She is a fan of Somatic Sex educators. Rita is an advanced student of the “Compassionate Inquiry” model developed in Maté’s group healing circles.

Rita is devoted to the work it takes to become human and cares deeply about people and the world. At 15, training to be a professional dancer, she made a pact without herself: slow suicide. She attempted this with anorexia, drugs, cigarettes, abusive relationships and by making herself responsible for other people’s pain. Drawing on her own experience of relational and developmental trauma, attachment and autonomy wounds, her mandate as a somatic relational therapist is to cultivate the embodied witness; to create gentle and accepting spaces for healing, integration and transformation. She remembers to laugh when the shit gets tough.

Rita uses her presence, patience, and playfulness to connect with those she works with, and invites them to get honest, and experience existence on a deeper level.

Rita continually hones her ability to listen and attend to the specific needs and stressors of clients. She helps clients sense into their imprints and helps them create openings for new choice. She seeks clarity in her work and in her interactions. While she assists clients in reconnecting the disconnect that occurred long ago between their mental, emotional, physical, and spiritual bodies, her own personal work is ongoing under the guidance of her trusted mentors.

She opened her private practice in Calgary in 2002 and has been busy ever since. Her practice quickly grew in Calgary as she introduced clients to a blend of Zen Shiatsu, Craniosacral, Visceral Manipulation and Reiki. Her thirst for knowledge has motivated her to participate in, and study numerous body/mind/healing systems over the years.

She wrote, created, produced and co-starred in The Damage is Done – A True Story with her great mentor Dr. Gabor Maté which was performed to sold out audiences at The Banff Centre, at the Van East Cultural Centre and in Whitehorse. In 2018 she performed for the last time in her solo show My Fair Lady – the Punk Version.

Rita’s other passion is writing. She recently completed her literary historical fiction novel When I Was Better. She is still receiving royalties for 52 Pick Up, a play she performed, co-wrote, co-produced and co-directed with TJ Dawe which has been performed by over ten national and international theatre companies in Canada, England, Australia, New Zealand, Iceland, France and the United States. The play received the Chapters’ Best Text Award at the Montreal Fringe in 2000 and appeared at the High Performance Rodeo in Calgary. In 2012, 52 Pick Up was translated into Icelandic and French.

In 2012, she won 3rd Prize for Creative Non-Fiction with her piece State Controlled Paprika in the Great Canadian Literary Hunt by THIS Magazine. Rita has published fiction and creative non-fiction in THIS Magazine, The New Quarterly, Pages of Stories, Unlikely 2.0, WritingRaw.com and articles in FFWD Weekly on lifestyle and international travel.

Her travel stories have been heard on CBC Radio.

Rita has found her private practice and creative endeavours to be mutually complementary. She brings love, commitment and curiosity to both. Her ultimate mission is to decolonize the body and teach people to regulate themselves so that they can experience embodied, rich, creative and soulful lives.